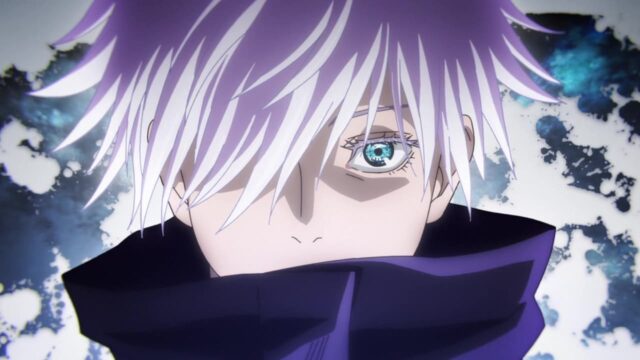 Speaking of Jujutsu Kaisen’s most powerful sorcerer, Gojo Satoru goes without saying, doesn’t he? He himself said that he was the strongest, and just because Gojo Satoru was born, the balance of power in the world collapsed.
Moreover, perhaps because of Gojo Satoru’s eyes are opening, the curse masters of the world are no longer able to easily do bad things.

Gojo Satoru is the strongest such sorcerer in the world, but he is also congenitally strong, having been born with no-lower limit spells and the special technique of the six eyes.

However, I was curious to see the words “Gojo Satoru six eyes lost” in the search keywords on the Internet at 、、、、.

If he lost it, it would be the equivalent of losing his most powerful technique… I knew I had to look into this, so I did!

|Gojo Satoru is the strongest sorcerer.

Gojo Satoru said it himself, “Because I am the strongest. In fact, he is the owner of a technique that deserves to be called the strongest.

The combination of no-lower limit spell and six eyes is really strong.

Gojo Satoru was born into the Gojo family, one of the three families of the Gojo clan, and was born with both the Mugenjutsu (no lower limit spell) and Rokugan (six eyes), which are inherited techniques. This is the first time in hundreds of years that a sorcerer has been born with both of these.
Thanks to this formula, his spell power is “limitless” and he can never be attacked, and he can also use gravitation and repulsion to attack his enemies furiously.

In addition, the area expansion makes the opponent think and hit information endlessly, not only making them unable to move, but also crippling them from the inside of their head.

The word “infinite” is already sneaky, isn’t it?

By the way, Megumi Fushikuro has just as much potential.

Gojo Satoru is called the strongest, but a sorcerer with the same abilities as Gojo Satoru was actually born a long time ago. However, two of the Gojo Satoru’s opponents died in a hand-to-hand match between the three families.

The Gojo family’s opponent at that time was the Zenin family, and the sorcerer they fought was a sorcerer who possessed the same “ten kinds of shadow techniques” as Megumi.

So the ten types of shadow techniques have the potential to defeat Gojo Satoru’s techniques, is that right?

Incidentally, this incident seems to have been the moment when the Gojo family and the Zenin family got into a beehive relationship.

Now that we have looked at Gojo Satoru’s dangerous abilities, it would be a big deal if he were to lose this ability.
Isn’t it possible that Gojo Satoru will lose his six eyes?

Gojo Satoru’s no-limit spell and six eyes are still alive and well! But they are sealed.

In conclusion, Gojo Satoru did not lose his six eyes and is still the strongest. However, he fell into the trap of the fake Geto Suguru and the spellcasters, and was sealed away.
However, even though it was sealed, no physical time has passed within the seal, and the technique is still intact.
No physical time means no hunger, no bathroom, no sleep, but…

Is the loss of Gojo Satoru’s six eyes due to the design of Gokumonkyou?

Gojo Satoru is the strongest sorcerer in the world, and although he was sealed, he did not lose his six eyes.
For now, it’s a relief…
And in the background of the speculation that Gojo Satoru might lose his six eyes, it seems that there was also the existence of Gokumonkyou.

It seems that this eye problem has been bothering some readers, as if it has the power to seal Gojo Satoru’s eyes or make him lose his power.

In fact, it was a [sealable box with eyes, and abilities].

It seems that he did not deserve to take Gojo Satoru’s six eyes.

Even though it is sealed, it is still invincible, isn’t it?

|Gojo Satoru’s six eyes are alive and well! The theory of loss is Gokumonkyou’s fault.

In this article, we looked at Gojo Satoru’s six eyes. Gojo Satoru has the most powerful technique, but the sixth eye plays an important role in using that technique.

If he loses his six eyes, Gojo Satoru will no longer be the strongest, and this will be a big deal in the story. However, in reality, although he was sealed by Gokumonkyou, the loss of his six eyes has not occurred at this point.

He didn’t lose his six eyes, but Gojo Satoru was sealed away entirely.

Because of this, the balance of the world has collapsed, and the world has become even more chaotic, so it may not make much difference if you say that the six eyes were lost.

|When will “Jujutsu Kaisen” Gojo Satoru be resurrected from his seal? He will be resurrected with the help of his students, but I have a feeling that he will be in a battle with Sukuna!

Jujutsu KaisenThe strongest man in the series, Gojo Satoru, is trapped and sealed by an unexpected target…!
He has been carefully preparing for the seal, and with one last push, he will be reunited with his best friend who is supposed to be dead…

This momentary lapse was the trigger that sealed the deal for Gojo Satoru.

However, Gojo Satoru, who is optimistic even when sealed, thought he could handle it, but… he didn’t expect to remain sealed, and the story took another turn!

When exactly will Gojo Satoru be back? In this article, I’m going to take a look at Gojo Satoru’s resurrection!

Gojo Satoru is the strongest of the three families of spellcasting, with six eyes and no lower limit spellcasting.
He is always covered with a very thin barrier. I’m sure you’ve heard of it, but I’ve never heard of it. He is a man loved by the author, but he was unexpectedly sealed.

This seal was the result of a secret plan by the spirit of the spell.

Gojo Satoru’s sealing is planned by the spirits of the dead, and will take place on October 31.

The cursed spirits Mahito, Jyougo, and Hanami, and the curse-maker Getou Suguru, were plotting and working to seal Gojo Satoru.
Incidentally, the reason why Getou Suguru, his former best friend, is after Gojo Satoru is because this Getou Suguru is a fake.

Gojo Satoru’s sealing method is Gokumonkyou, but the conditions are quite strict!

As mentioned earlier, Gojo Satoru is the strongest sorcerer.

In the manga, Nanamin is said to be so influential that if he were to disappear, the balance of the world would be shattered.
The only way to seal such a powerful man is with a special tool called “Gokumonkyou”.
The mere mention of the Gokumonkyou makes Jyougo so excited that he burns the people around him. The Gokumonkyou attacks many humans and altered humans at once, creating a scythe for Gojo Satoru.

Then he activates Gokumonkyou, and just as Gojo Satoru is about to flee, Natsuyu Jie appears, the man who once put the kibosh on him.

As expected, Gojo Satoru stiffened 、、、、、 and at that moment, he was sealed by Gokumonkyou.

|Gojo Satoru looks comfortable even after sealing! He entrusts everything to his students.

Gojo Satoru fell for the trick and was sealed up. He also said, “I was in a bind.

He decided to wait and trust his own students in Gokumonkyou.

It was an all-out battle, but in the end, Gojo Satoru’s seal was not lifted.

The battle in Shibuya turned into a war between the Sorcery College, who wanted to take back Gojo Satoru, and the Spirits, who wanted to stop them.
However, as a result, the members of the Sorcery College were severely wounded and were unable to break the seal on Gojo Satoru.
On the spellcasting side, all but Jie Natsuyu were defeated, but it doesn’t seem to have much of an impact.

And the world went on as if it was going to be ruined at once.

Gojo Satoru is sealed and the balance of the world is messed up.

As Nanamin had said, the world was a mess now that Gojo Satoru was gone.
The city was now a hellish place, with dangerous spirits wandering around. The remaining sorcerers, some of whom have been injured, are trying to fight back against the evil spirits.

The story goes to the next level! The President is sentenced to death and Okkotsu goes after Itadori!

With the sealing of Gojo Satoru, the world collapsed and the very story took the next step.
Gojo Satoru, as a traitor, was found guilty of breaking the seal, and the President was sentenced to death, along with him.
And Itadori, the vessel of Tsuina, whose execution had been suspended, was to be executed.

He’s the main character and he’s being executed. 、、、、

And the enforcer is Okkotsu Yuta, a student of Gojo Satoru and the main character of Jujutsu Kaisen Vol. 0, … .
I didn’t think it would turn out to be a battle of protagonist vs. protagonist, but in a way, it’s getting more exciting than ever!

Are students the key to Gojo Satoru’s revival?

The world has gone in a terrible direction, but I believe that Gojo Satoru will somehow be able to revive it.
The students that Gojo Satoru has laughed at and entrusted to his care, there’s no way they’ll abandon him so easily.
Even if they make an enemy of the Sorcery College of Technology, they will probably do their best to save Gojo Satoru.

Itadori, Fushikuro, and Okkotsu will join forces in a heart-pounding development!

As for the timing of Gojo Satoru’s revival, it is difficult to say at this point. However, there are students in Gojo Satoru that I can trust.
Itadori, of course, but also Fushikuro, Panda, Inumaki, Maki-chan (though her life and death are in danger), and Okkotsu.
If Itadori is here, then Toudou from Kyoto School will be joining us!

I’m sure they’ll gather their forces and go on a mission to take back Gojo Satoru.

Gojo Satoru was framed and sealed by the spell, but is it possible to escape from Gokumonkyou? As Jie Natsuyu said, he will be released in 100 years or 1000 years.
And since there seems to be no passage of time in Gokumonkyou, even if it is 1000 years from now, it will be a perfect time slip.

Moreover, Gokumonkyou can’t be reused unless the person inside commits suicide, though Gojo Satoru might be able to create a temporary state of suspended animation.

The story culminates with Sukuna’s resurrection and Gojo Satoru’s return?

Let’s say Gojo Satoru does make a comeback…!
I think the most exciting part of the story is the match-up with the fully resurrected Ryoumen Sukuna.
It seems that Sukuna is trying to revive himself with Fushikuro’s Ten Kinds of Shadow Technique.

If that happens, Itadori will be free, and we can expect to see a battle with both sides of Shugugina, with Gojo Satoru!

Gojo Satoru’s activation from the seal is still undecided, but the key is still the students of the Sorcery College of Technology.