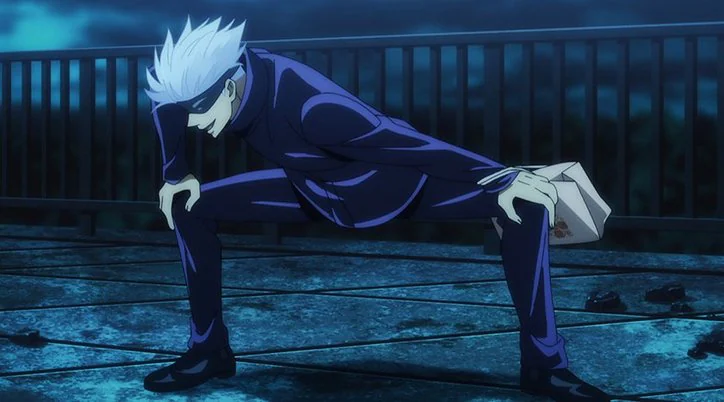 He is a homeroom teacher at the Tokyo School of Witchcraft and Wizardry, and a special class spellcaster. This is a collection of Gojo’s best quotes and scenes from the series. Please take a look at Gojo’s cool lines and famous scenes that will make you passionate.

◆That’s my theory. There’s no curse more twisted than love.

In the first episode of Jujutsu Kaisen Vol. 0, Okkotsu says, “Maybe Rika-chan didn’t put a curse on me, but I put a curse on Rika-chan. In the past, Gojo-sensei also had a love affair with someone? This is a line that makes you smell. I hope the truth behind this statement will be revealed in the future.

◆We’re not allowed to take youth away from young people, no matter who they are.

This is the line he muttered after being implicitly told by the upper echelons that they were thinking of getting rid of Okkotsu in Jujutsu Kaisen Vol. 0, Episode 2. This is not the only time he says this, he also says it in episode 11 when he decides to hide Itadori. You can see how Gojo is letting him cherish his experience when he was young.

In the second episode of Jujutsu Kaisen, Gojo asks Itadori, “Can I take over for Sukuna? but when Itadori hesitated, he said, “But. It’s a line that is synonymous with Gojyo Satoru. I thought, “If you say something like that from the beginning, you won’t be able to keep up with the inflation in the story, will you?” But he is the strongest, and I hope that he will be released from the seal soon, so that he can go on a rampage like this.

◆Don’t be shy. I’m embarrassed for you.

In the 14th episode of Jujutsu Kaisen, when Jyougo was unable to touch Gojo’s hand after he revealed the details of his technique, and Gojo asked him if he could shake his hand, but he refused. This is the moment when Gojo-sensei’s strength, which he had been boasting of as “the strongest,” became clear to me. This line is also famous in TikTok.

A technique used by Gojyo to kill Hanami from afar in the 52nd episode of Jutsu Kaisen. This is the first time I’ve ever seen it. The spell power output is so overwhelming that it makes you think, “What was the battle between Toratane and Todo so far? This is a powerful scene that makes you think, “As expected of Gojyo Satoru. Even Tohdoh said, “You’re still out of this world. I’m not sure what to make of it, but I’m sure it’s a good idea.

◆no matter how many allies you have around you, when you die, you’ll be alone.

In the 58th episode of Jujutsu Kaisen, this is the line that Gojo gave when Fushiguro, who was training him, said, “It’s important to cooperate with other jutsu masters, isn’t it? I’m not sure if I’m going to be able to do this, but I’m sure I’ll be able to do it. But Yuji and I would always go for the home run.” “I’m not saying that bunting is bad, baseball is a team sport and each player has a role to play, but a sorcerer is an individual sport. You can’t imagine yourself getting a little stronger in the future.” “Maybe it’s because of your backhandedness, you think everything will be solved if you die.” “You can’t be me or even Nanami then.” “Winning by dying” and “winning by dying” are totally different, Megumi.

These are the words that triggered Fushiguro’s development in the realm, and it’s no exaggeration to say that Fushiguro became stronger thanks to these lines.

◆I’m the one and only. In heaven and on earth

A line uttered by the awakened Satoru Gojo during his battle with Zenin Touji in the 76th episode of Jujutsu Kaisen. This is the moment when the truly strongest spellcaster was born. After all, the scene of a character’s awakening is too cool. The words “I’m the one and only. In heaven and on earth” could be said to be for this man and Sukuna.

◆I’m saying I’m surprised you have the brains to think you can beat me at this.

In the 84th episode of Jujutsu Kaisen, Gojyo’s line to Jyougo, who had gathered a large number of people at Shibuya Station and created conditions that made it difficult for Gojyo to fight. He is as arrogant and irreverent as ever. It’s a super perfect statement, but the charm of Gojo is that he is the strongest. I think this is one of Gojo’s typical lines. The fact that he is so condescending is also good because he is convinced that he is the strongest.

◆Eliminated in 299 seconds after realm deactivation

In the 89th episode of Jujutsu Kaisen, the scene immediately after Gojyo’s 0.2-second area expansion against Jyougo and other special class spirits on the Fukutoshin Line platform. It is an overwhelming scene where he massacres 1,000 modified humans in just 299 seconds. This kind of out-of-the-ordinary depiction is the essence of Gojo. From Jyougo’s point of view, this is nothing but a demon.

◆When Satoru Gojo was born, the balance of the world changed.

The scene when Grandma Ogami and Awasaka see Satoru Gojo as a child in the 96th episode of Jujutsu Kaisen. This is the scene where it is revealed that Gojo, the strongest magician, was the strongest even as a child. It seems that the child Gojo is more aggressive than the adult Gojo and can’t be handled, but I definitely don’t want to deal with such a child.