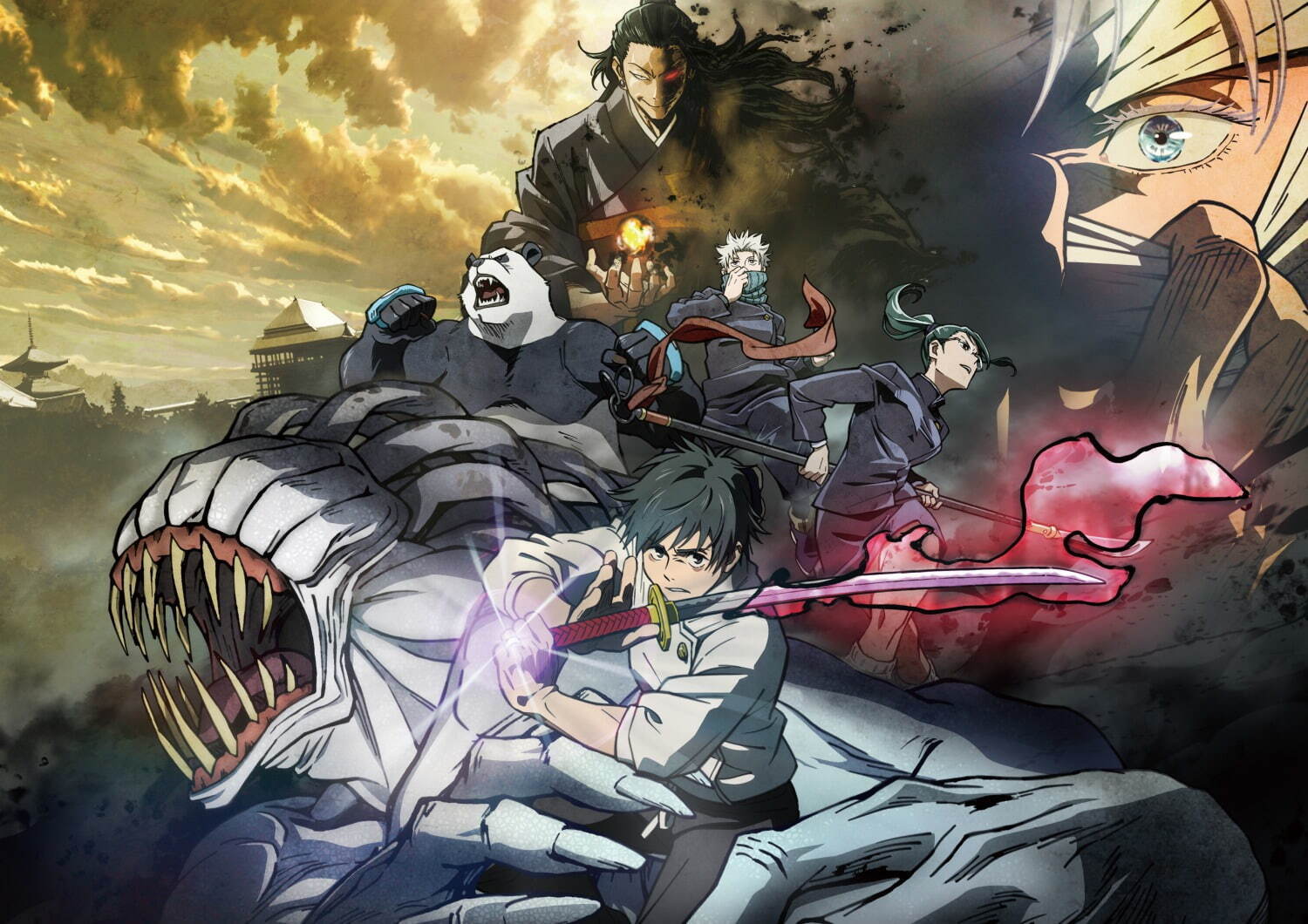 The Jujutsu Kaisen vol.0 movie is very popular, so I asked for feedback on it.
Many people have seen it, and many said that they were moved to tears by the movie.

The prequel to the supernatural exorcist adventure Jujutsu Kaisen!In a world where cursed spirits feed on unsuspecting humans, fragments of the legendary and feared demon Ryomen Sukuna were lost and scattered about. Should any demon consume Sukuna’s body parts, the power they gain could destroy the world as we know it. Fortunately, there exists a mysterious school of Jujutsu Sorcerers who exist to protect the precarious existence of the living from the supernatural!Yuta Okkotsu is a nervous high school student who is suffering from a serious problem-his childhood friend Rika has turned into a curse and won’t leave him alone. Since Rika is no ordinary curse, his plight is noticed by Satoru Gojo, a teacher at Jujutsu High, a school where fledgling exorcists learn how to combat curses. Gojo convinces Yuta to enroll, but can he learn enough in time to confront the curse that haunts him?

|What was the most memorable scene?

I solicited word of mouth for the most memorable scenes.

What was the most memorable scene in the manga?

The scene where Rika-chan tries to kill Maki and gets upset when Yuta gets mad at her.
The scene where Okkotsu Yuta asks Rika to fight with him to protect his friends.

What was the most memorable scene in the movie?

The scene where Okkotsu kisses Rika

At the end, Okkotsu tells Rika that he will give her everything he has and that he needs her strength, and Natsuyu calls him a womanizer, but he tells her that it’s pure love.

The scene where Okkotsu Yuta asks Rika to fight with him to protect his friends.

|We asked for your thoughts on Jujutsu Kaisen0.

Impressions of the movie Jujutsu Kaisen0

I watched the movie version after reading the original manga.
The main flow of the story was the same as the original story, but with the movie-quality drawings and the appearance of characters that did not appear in the original story, such as Nanami and the Kyoto school members, it was well worth watching. I think this is a must-see work for those who want to watch the second season of the anime.

The story is a prequel to the main story, from Okkotsu’s enrollment at Tokyo Prefectural Jujutsu High School to Natsuyu’s Hyakkiyakko. But in the final battle against Natsuyu, I finally felt like a strong character, and my hands were sweating.
Personally, I would have liked to have seen more of Gojyo in the Miguel battle.

I had the impression that detailed descriptions had been carefully added to the completed manga story.
The gap between the languid Okkotsu at the beginning of the story and the Okkotsu fighting Natsuyu at the end, and the degree of growth was amazing.
From the little gestures of everyday life to the powerful battle scenes, all of it was drawn with great care and beautiful images that drew me in.
I also think the music in the work was very good. I was attracted to the music in the anime, and the movie did not disappoint either.
The BGM for the battle scenes should definitely be heard in the theater.
On the other hand, in the scene where Okkotsu kisses Rika, there was no sound at all, and I felt a very tense atmosphere. I felt as if even the sound of my own breathing was noise. I got goose bumps from the way they eliminated even the lip sounds that were in the original.

I saw it in the theater once to follow the story and once to enjoy the music.
The theme song was also very nice, and I thought it was the best movie of the year. I’ve only seen the first season of the anime, and I’ve never seen the original Jujutsu Kaisen vol.0, but I saw the movie, and it was still very interesting and moving, and I cried.
Of course I was struck by the relationship between Yuta Okkotsu and Rika-chan, but I was also struck by the friendship between Gojyo Satoru and Getou Suguru.
The kindness of Panda-senpai, Toge, Maki, and the second-year students towards Okkotsu was also very good, and I think it was a wonderful work that depicted the goodness of all the characters.
Personally, Natsuyu’s “womanizer” and Okkotsu’s “That’s rude, it’s pure love” made me swoon.

The end roll song that was played after the movie was over was also very good and suited the movie very well. The story was faithfully based on the original work, and the beauty of the images and the acting of the voice actors were very nice.
It was wonderful to see Okkotsu’s awakening from his depression and seclusion to his efforts with his friends.
In the battle scene with Natsuyu, the squishy Okkotsu woke up and did a complete 180 and used Rika-chan to fight, it was amazing!
The battle scenes were so fast that I couldn’t follow them with my eyes, and the artwork was breathtaking.
The last scene of Gojyo and Natsuyu’s conversation was actually written in the original story with a blank space, and I wondered if it might be this one. I was expecting it to be like this.
But when you see it in the movie, even though there is no sound, somehow the answer turns into certainty. I think this is one of the charms of film.
And the end roll was so meaningful that I was hoping it might be a happy foreshadowing! And the end roll is so meaningful that it makes me wonder if it is a happy foreshadowing.

This Jujutsu Kaisen movie has a lot of homages to Evangelion, and the voice actors are the same, so there were many scenes that only Evangelion lovers would understand.
In my opinion, the scene of Okkotsu Yuta calling out “You can’t die” overlaps with the scene of Shinji-kun saying “You can’t run away” so much that I found myself laughing at the movie theater.
I got goosebumps when I saw the battle scenes because of the beautiful artworks and the power of the movie theater.
Okkotsu Yuta and Rika-chan were so strong that it was exhilarating. I would like to see this movie more than once.
I’ve read the manga, so not only did I learn about Okkotsu Yuta’s past, but I also learned about Gojyo-sensei’s state of mind, which makes me even more excited for the future of the Jujutsu Kaisen series. I watched both the movie and the manga, and there was no difference in the storyline between the two.

Okkotsu, who was cursed by Rika Orimoto, had a gloomy personality that prevented him from getting along with people and having friends, but as he met Gojyo Satoru and fought the curse, he started making friends.
In the middle of the story, when Rika got jealous of Maki and Okkotsu got angry, I couldn’t help but laugh at the menhera feeling.

At the end of the story, Okkotsu tells Rika that he’ll give her everything he has and wants her strength, and I was worried about what would happen to Okkotsu after that, but I was relieved to see that it was actually Okkotsu who was cursing her, and that both of them were released. I was relieved when both were released.
The battle scenes in the middle of the story gave me goosebumps over and over again, and I couldn’t stop crying at the end of Natsuyu.
I’m a fan of Toge’s, but Gojyo-sensei’s sadness overflows in his last line, and the way he trusts his partner in any way is the essence of this story.
In the manga, Rika-chan explains why she is happier than when she is alive, and after that, when I watch the movie version, I cry more and more.

I was curious about Jujutsu Kaisen from the movie commercials, so I read it from the beginning.
In this volume, Okkotsu Yuta, who appears in the movie, appears for the first time in volume 16. I was attracted by his strong character and read the Jujutsu Kaisen 0 manga.
Okkotsu Yuta himself is a very timid young man and does not seem like a very strong sorcerer. His childhood friend, Rika, died in a car accident and became Yuta’s magician. Rika was very strong, and I thought it was because of her.
However, Yuuta enrolls in Tokyo Prefectural Jujutsu High School, and as he learns more and more, Yuuta becomes stronger and finally releases the curse of Rika.
I was surprised when I found out that what I thought was Rika’s power was actually Yuuta’s own power.

Thoughts on the manga Jujutsu Kaisen0

Okkotsu is the main character in this story.
What kind of guy is Okkotsu? I’m sure everyone was wondering, “What kind of guy is Okkotsu?
He’s a special-grade spellcaster, so you’d expect him to be a strong guy, but instead he’s just a weak, lazy boy.
In this movie, we saw Okkotsu meet Gojyo and his friends at Tokyo Prefectural Jujutsu High School, and see him grow not only in his magic but also in his mind.

Since I had read this magazine, I enjoyed watching Okkotsu and his classmates getting to know each other, and I was very moved when Okkotsu sacrificed himself to go to Natsuyu after his classmates were hurt.
I also enjoyed getting a glimpse of the past relationship between Gojyo and Natsuyu, and the “What? I also enjoyed the side of the story that made me think, “What the hell is Getou now?

At first, I thought it might be a jump version of the Naro style. I started reading it thinking that it would be a royal jump version, but I was glad to find that the story was more coherent than I had expected, and the characters in the story were well-defined and easy to read.
I was a little concerned about the panda in the story. But by the end of the book, it was as if nothing had happened and I was glad that I was able to get used to it.
I thought it was a good story for a movie because the story was well written in one book, but at the end, I wondered if Rika-chan had disappeared? Will she ever come back? I think the way the story was told left some fans of the magazine feeling a bit confused.