[The Shaman King Exhibition] Biting into the charm of Master Hao at the original art exhibition that opened in Kyoto. 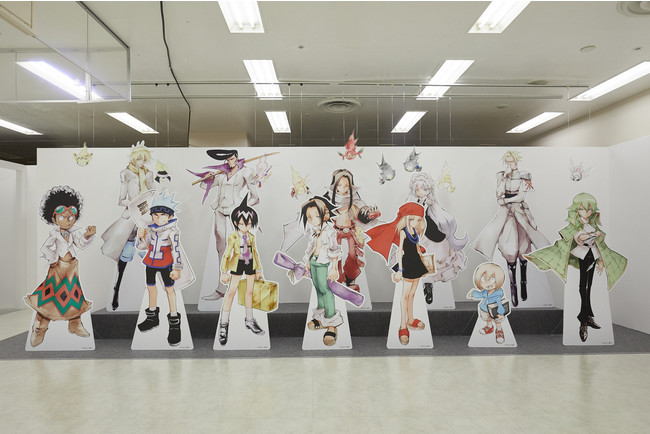 The “Shaman King Exhibition” is being held at the Daimaru Museum Kyoto from February 17, 2022. This is a report on the first day of the exhibition, the 17th. Of course, we took care to cover the event with infection control measures in mind. The online fan meeting held the day before on YouTube is a perfect primer!

This Kyoto venue was originally supposed to be held already, but was postponed until this day. Fans must have been tired of waiting with their necks stretched too long.

However, it was revealed in the online meeting that if the event had been held as planned, the “newly drawn key visuals” would not have existed. Also, as I’ll mention later, there were no newly drawn exhibits. I was told that this was all a fan service by Mr. Hiroyuki Takei, so I went to the venue with great enthusiasm, thinking that I had to go and see it for myself …….

When I arrived at the venue with my timed ticket (only during certain periods) in the cold, with light snowflakes flying, there were already fans entering at the same time, looking at and photographing the life-size pop-up in front of the entrance.

And now it’s time to enter! The mini color paper I received was from Master Hao. A good start!

This year’s exhibition is the culmination of all the new features that have been added to the original exhibitions that have been held in various locations since November 2019, including the “Osorezan Le Voile” corner that has been available since the Aomori venue, the “Seibu Line Jack Ad” that has been added since the Nagoya venue, and of course the new project that is unique to the Kyoto venue. There was also a new project unique to Kyoto. This corner focused on the Asakura leaf king, Hao-sama!

Kyoto was the location of Heian-kyo, the capital of Japan, where King Asakuraha lived, so the manuscript of “Mappa Doji” was published amidst lanterns decorated with a five-pointed star, and you can enjoy many scenes in the original manuscript along with the famous words of Master Hao.

Incidentally, the venue, Daimaru Kyoto Store, is located inside Heian-kyo, the capital of the time. It stirred my imagination that maybe some of the places that appeared in the recollections of the original work might have been depicted in this area.

And this is not the end of the highlight! In the second half of the show, there will be three huge color manuscripts that were drawn especially for this show! Gandara”, “Shonen Tenshi Marco”, and “Lucifer B”, which have also been made into tapestries and clear art panels as new products. What can I say? The size is huge! I hope you will see them in person and be overwhelmed. …… They are that powerful!

In addition to this, character pops from “Shaman King FLOWERS” and “Shaman King the Super Star”, including Hana Asakura, were all on display, giving a really great “it’s not over yet” feeling. This is the end of the event, but there is still a lot to look forward to.

I headed there with high hopes, but …… was sold out by no chance! There was barely one “Funbari Onsen Manju” left, but the “Matamune O Manju” was sold out, and the main store at another location didn’t have it either. I had to give up, but if you want one, you might have to go there as soon as the store opens. ……

The “Shaman King Exhibition in Kyoto” will be held until February 28th (and the collaboration “Omaju” will also be sold until that date). This is the end of the 20th anniversary of the publication of “Shaman King” and the culmination of the exhibition, so whether you haven’t seen it yet or are a regular visitor (?), why not visit? If you haven’t seen it yet, or if you are a regular visitor, why don’t you come and see it?

The exhibition will be held from 10:00 to 20:00 (closing at 17:00 on the last day) on the 6th floor of the Daimaru Kyoto Store (79 Tachiuri Nishi-cho, Shijo-dori Takakura Nishi-iru, Shimogyo-ku, Kyoto City) until February 28, 2022. Tickets are only available on Saturdays, Sundays and national holidays during the exhibition period. Same-day tickets will be available at the venue.