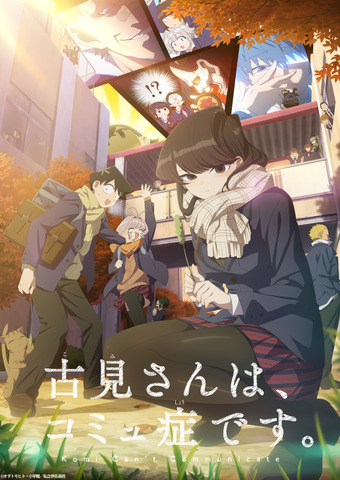 The second season of the TV anime “Komi Can’t Communicate,” the production of which has been announced for some time, has announced its first broadcast date, a new key visual, additional cast members, and the artist in charge of the OPED.

Komi Can’t Communicate (original story by Tomohito Oda) is a manga work serialized in Shogakukan’s Weekly Shōnen Sunday. The series has sold over 6 million copies in total, and the first TV season aired in October 2021. A second season was decided to be produced after that.

Along with the announcement of the broadcast date, a new key visual was also released, showing Komi and her friends trying to lure a cat with catnip, with Komi’s friends and other characters she will meet in the background. We hope you will take a closer look at the details.

Shinichiro Kamio also joins as a new cast member, playing the role of Makoto Katai. Character introductions and cast comments have been received. The full text is below.

Are you a hard-core person, Katayi-kun?
He is reserved and does not like to talk to people or take action on his own. He used to be a bit of a recluse, but during the summer vacation, he made up his mind to work out, dye his hair, and change his appearance. However, because of this, he is considered a delinquent by those around him.

Cast Comments
Q1. What is your impression of this film?
I like it very much because it is very warm and friendly. It is really heartwarming to see how Tadano-kun continues to communicate with Komi, not caring about her communicativeness. Tadano is not just a person who speaks well.
I wish I had a friend like him. I think I love Tadano-kun. By the way, I can’t stop watching Komi trying her best to speak in her own words for her friends.

Q2: What is your impression of the character you play and your enthusiasm for the role?
Makoto Katai is a lovely guy. He is straightforward, which is why his actions are never blurred. If he works out straight, he’ll have a real body, and he’s a straight tough guy, and he’s a straight “commie” this guy. I’m looking forward to playing him, and I’m really happy to be the voice of Makoto Katai.
I will give it my all. By the way, I feel that his love for Tadano-kun is just like mine.

In addition, information on the opening and ending themes was also announced this time. The opening song is “Blue 100 Colors” by Miki Ito, who celebrates her 5th anniversary as a voice actor as well as her artist debut in 2021. The ending song will be “Kochachi Biyori” by FantasticYouth, a two-person unit consisting of Onyu, a vocalist with overwhelming singing ability, and LowFat, a composer, rapper, and vocalist. Comments from the artists have been received, and are listed below.

I am very honored to be asked to sing the theme song for the second season of “Komi Can’t Communicate.” I will do my best to express Komi’s cute, cute, and slightly frustrating worldview in my singing voice. The theme song “Blue 100 Colors” is a fresh and catchy song that evokes the blue of each person’s youth. I hope you will enjoy not only the ear-catching melody but also the sweet and sour taste of the poetic lyrics.

Hello, I am Onyu, FantasticYouth. I am pleased to announce that I will be the ED theme for the second season of the TV anime “Komi Can’t Communicate”. In my mind, the song has become a lovely song that makes me feel both the dazzle of Komi and her friends and nostalgia for the distant days of my youth. I hope that listening to “Komi Can’t Communicate” will make you feel “something good” about communicating with someone around you, even if it seems embarrassing. I hope this song can support Komi and your small step.

The second season of “Komi Can’t Communicate” will air soon. What kind of “comedy about a beautiful girl with communicable diseases” will be depicted in the second season? We will have to wait and see.

[INTRODUCTION
What is “communopathy”?
Symptoms of difficulty in socializing with others. Or a person with such symptoms.
It should be noted that…
Just because you are not good at something doesn’t mean you don’t want to be involved with others.
In the first year of high school, when the cherry blossoms are in full bloom, Komi, who is extremely communicative, meets Tadano, a classmate who is “too normal” for her.
Komi, who gets nervous in front of others, dreams of making 100 friends.
Tadano becomes Komi’s “first friend” and helps her make friends with the remaining 99 people in her class.
Will Komi’s dream come true in a high school full of unique individuals?
Wanting to tell, but not being able to… Fidgeting, thrilling, and unintentionally smirking!
But sometimes, it will prick you in the chest?
A comedy about a beautiful girl with communicable diseases is about to begin.

[Broadcast description
Komi Can’t Communicate
1st season available exclusively on Netflix
2nd season: Starting on April 6, 2022, the show will air on Wednesdays from 24:00 on TV Tokyo!
Broadcast every Wednesday from 25:35~ on TV Osaka and 26:05~ on TV Aichi!