The second season of “TIGER&BUNNY” will start airing in 2022! 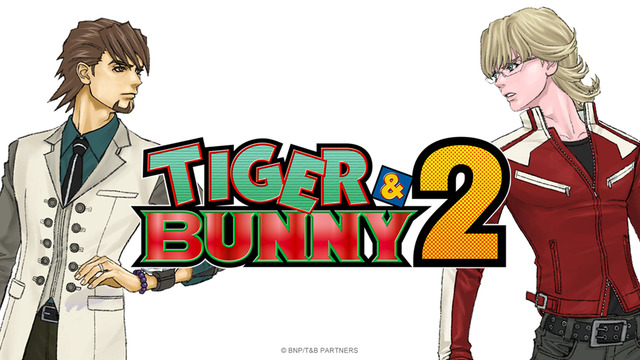 TIGER&BUNNY” is an anime in which unique heroes wearing sponsor logos play a major role.
It is also known by the name “TIGER&BUNNY.
The first TV anime season was broadcasted, and from there, two movie versions of this popular work were produced. It has been announced that the second season will begin airing in 2022.

So today we will discuss the synopsis of the first season of “TIGER&BUNNY,” the introduction of the characters, and some points of interest for the second season.

The story follows the exploits of a professional hero, Wild Tiger (Toratetsu Kaburaki), who possesses a special ability called “NEXT,” and his partner Barnaby.
Manga artist Masakazu Katsura, creator of “Denei Shoujo” and “ZETMAN,” designed the characters, and the novel setting of the characters’ suits with logos of actual sponsors attracted attention and became popular.

The fact that Masakazu Katsura, known as the creator of “DENKAGE SHOJO” and “ZETMAN,” designed these unique characters also attracted attention.

The TV anime began airing in 2011, and movie versions were released in 2012 & 2014.
The popularity of the series has not waned since then, and a live-action film adaptation has been decided in Hollywood, U.S.A. As mentioned at the beginning of this article, a second anime season has also been announced for the airing.

|TIGER&BUNNY” Review of the first season and the movie version before the second season.

Sternbild, a city of many races and ethnicities.
In this city, a program called “HERO TV,” which broadcasts the activities of heroes with “NEXT” (special abilities), has become popular.
Kaburaki Toratetsu, who has been active as Wild Tiger for more than 10 years, is one of them.
He had been blessed with many abilities but was unable to make good use of them and became a failed hero.

The two have the same abilities, but their completely opposite personalities make it difficult for them to work together, and they struggle day after day.
Tiger is a failed hero, and Barnaby is a rookie who lost his parents.
Will they be able to work well together as heroes and buddies?

|TIGER &BUNNY the Movie – The Rising

One year after the TV anime.
Toratoru (Wild Tiger), whose ability has become short-lived, has been working as a second division hero with Barnaby.

Then, the owner of the company they belong to changes, and only Barnaby is allowed to return to the first division.
Naturally, his partner is not Toratoru, but a new hero named Golden Ryan.

Barnaby is perplexed, but starts working with his new partner.

Then, a series of unexplainable incidents occur in Sternbild…

*Introduction of the first theater version, “TIGER &BUNNY the Movie – The Beginning-” is omitted as it is a film with new cuts and episodes added about episodes 1-3 of the TV version.

|What about the second season of the “TIGER&BUNNY” anime?

When does it start?

What we know as of March 2021 is that
▼ Scheduled to start in 2022
All 8 main heroes appear, including characters & voice actors
Completely new film depicting the story after “TIGER &BUNNY the Movie – The Rising

The official website has comments from staff and cast members on board, and it appears that the script for the first episode has already been completed.

Morita-san, who plays Barnaby, left the comment, “The first episode was full of surprises,” which raises expectations considerably!
As for the cast, no characters other than the eight main heroes have been announced.
Personally, I’ll be keeping an eye out for the return of Golden Ryan, who was in the movie version!

Who sponsors the heroes?

This is an unprecedented animation in which heroes wear suits with logos of actual sponsors.

Moreover, the heroes themselves appear in the actual commercials of the sponsor companies!
So, the question arises, “What companies will come forward as sponsors in the second season?” I guess that’s what we are asking.
This call for sponsors was open from October 1 to 7, 2020.
Since this is a high-profile and high-profile animation that began as an animated TV series and has since had two movie versions produced, it can be expected that there was quite a high turnout.
*We will add this item as soon as it is announced!

What is the theme song?

Given this, it is highly likely that they will be in charge of either the OP or ED for the second season of the anime as well.
Some people have the image of “TIGER&BUNNY = UNISON SQARE GARDEN,” so what kind of singer will be in charge of the theme song? It will also be interesting to see!

Main characters and cast of TIGER&BUNNY

His feelings as a hero are second to none, but when he concentrates on his work, he often loses sight of his surroundings and destroys the city. His relationship with his partner, Barnaby, does not go well in terms of personality and feelings, but he has his own persistence! The relationship gradually changes to one of mutual trust.
He has a daughter named Kaede and is married, but his wife has already passed away.

He lost his parents when he was young, and is working as a hero to avenge their deaths.
Because of this situation, he does not use a hero name, but his real name.
He always speaks respectfully to those around him and has a dry personality, so at first he reacts coldly to Toratoru.
However, after the battle with the thug Jake, he realized that he and Toratoru trust each other, and the way he addresses Toratoru has changed from “Uncle” to “Toratoru-san.

She is a hero and idol because of her looks, but normally she is an ordinary high school girl.
Since she is a hero in order to pursue her dream of becoming a singer, she is often dissatisfied with the content of her activities.
She is gradually attracted to Toratoru, who helps her at that time.

As his costume suggests, he excels at power-based attacks.
He and Toratoru have known each other for a long time and are good friends. They share many things in common, such as a tendency to be tearful and to engage in heroic activities without thinking about the future.

He is the epitome of a serious, righteous hero.
His personality makes him loved by fans of all ages, both men and women, and he is trusted by his fellow heroes.
He is known for his “thank you! And thank you!” His repetitive words are also impressive.

He looks like a man, but he is a woman at heart.
She is an older sisterly character who often counsels Toratoru and other fellow heroes.
In the movie version, she also describes an episode in which she was discriminated against because of her complex.

He suffers from a lack of heroism due to his quiet personality and abilities.
Although he has never had a sense of self, he grows to realize his own worth as the number of heinous crimes increases.
His costume is a replica of a ninja, and he has a strong yearning for Japan.

Although small in stature, she is a hero who uses her martial arts skills and her lightness of stature to her advantage.
She is not comfortable with feminine dress or language, which is often pointed out to her by those around her.

Daughter of Toratoru and a big fan of Barnaby.
She did not know that her father was Wild Tiger, and they lived separately and had a tenuous parent-child relationship.
Their relationship gradually changes when she awakens her abilities and learns her father’s true identity.

As the head of Apollon Media and “HEROTV” broadcasting company, to which Toratoru and Barnaby belong, he is a highly influential figure in the city.
He has known Barnaby since childhood and was actually deeply involved in the death of his parents.

A dark hero who uses his abilities to punish criminals who cannot be judged by law.
His true identity is Yuri Petrov, who works as an administrator and judge at the Judicial Bureau, and his father was Mr. Legend, a former hero of “HERO TV.

A criminal with a 250-year sentence, he is a member of Ouroboros, Barnaby’s parent’s avenger.
He has two abilities, which made it difficult for Toratoru, Barnaby, and other heroes to fight against him.

He is the producer behind HERO TV.
In order to increase the number of viewers, he routinely makes unreasonable demands of the heroes.

He is a talented developer who created the suits for Toratoru and Barnaby.
Basically, his voice is quiet, and he must speak through a microphone or with subtitles.