What is Kiyotaka’s aim in “classroom of the elite” ……? Explore the secret behind the popularity that has not waned even after the sophomore edition. 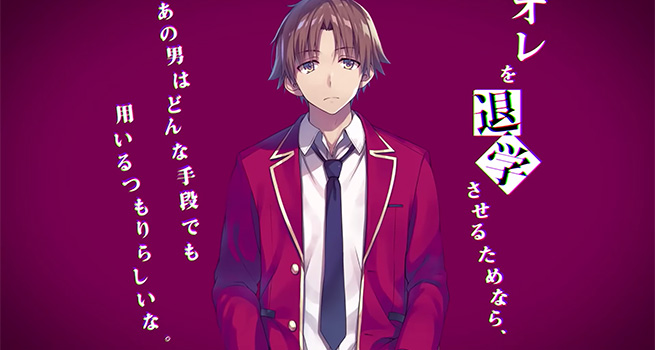 It is neither the romantic comedy that is so popular these days nor the otherworldly reincarnation that has been the subject of a series of anime adaptations. A light novel series about a death game set in a modern high school tops the ranking every time it is released, showing a high level of support. It is “classroom of the elite” by Akio Kinugasa.

Classroom of the elite” (MF Bunko J) released its latest book, “2nd Grade Arc 5,” on October 25, and ranked No. 1 in the weekly light novel ranking of Rakuten Books in the week just before its release (October 18 to 24). The fact that it topped the ranking ahead of “Sword Art Online,” which has sold 26 million copies worldwide, “Tensei Tareta Slymu Datta Netto” (A Case of Being a Slime After Being Reincarnated), one of the most popular otherworldly reincarnation stories, and the latest book in the “Magical High School Underdog” series is a testament to its popularity.

The protagonist is a boy named Kiyotaka Ayakoji, who has enrolled in a prestigious school, Advanced Training High School, where 100% of his desired higher education and employment will be fulfilled upon graduation. However, he is assigned to the bottom of the class, the D class of the first year, and compared to the A class, he is at a disadvantage in that he receives only a few points equivalent to money within the school, and a dark cloud is already hanging over his head.

Here, a girl named Suzune Horikita stands up for herself, who was assigned to Class D because of her lack of compassion despite her excellent grades. She becomes the leader of her class by winning the exams and events that unfold like a class competition, and appealing to earn points to move up to Class A. Kiyotaka ends up cooperating with Suzune.

Is Kiyotaka not the leader, even though he is the protagonist? That is the point of reading the “classroom of the elite” series. He was educated as a gifted student at a certain institution and was considered a super elite, even a masterpiece, but he ran away from the institution because he had something on his mind and entered an advanced training high school with low grades in order to keep a low profile. Although he does not take the brunt of the punishment himself, he prevents the D class from dropping out by devising a plan to get through an exam in which those who get a red mark are expelled, and by seeing through other classes’ plans for survival on a deserted island.

Like Tatsuya Shiba in “Magical High School,” everyone admires the way he displays his overwhelming ability to win battles and lead his peers as a leader. On the other hand, the “behind-the-scenes” position, where the person has tremendous power but stays in the background and plays a dark role, is also seen as cool. The book is called “I want to be a powerful man in the shadows” by Daisuke Aizawa. (Enterbrain) by Daisuke Aizawa has sold 1.5 million copies and will be adapted into a TV anime in 2022.

In the second year version, however, Kiyotaka gradually begins to show his true character in order to escape from the attacks of his pursuers and to overcome the increasingly rigorous examinations. In the following survival on a deserted island, he performed a great fight against the vice chancellor of the advanced training school, who had formed the intention of pursuing him.

Kaeka Kiryuin, who has always acted alone among the third-year students, was present at this scene and witnessed Seitaka’s fighting prowess. Kaedehana seems to be interested in Kiyotaka and keeps his secret, but since the school is full of students and teachers of all stripes, one can only imagine the possibility that Kaedehana will be heavily involved in Kiyotaka’s career path.

In the latest edition, “2nd Grade Part 5,” the students are given a problem that they cannot proceed unless everyone in the class agrees or disagrees with it. While working on this, Kiyotaka asserts himself in a way he has never done before, surprising everyone around him. The content of the test is quite an intense death game. Even though it is not as life-or-death as in the popular drama “Squid Game,” it was a matter of the future for the students. It makes one wonder what they would do if they were confronted with it in the real world.

Even the results they came up with left them wondering whether they were right or not. The verbal exchanges that took place in the process leading up to the outcome may have cracked the unity of the class. On the other hand, it is also possible that the class will become more united in the belief that they must turn the tables on the points and graduate as an “A” class, no matter what it takes. This work also makes us think about what is important in managing an organization and in gaining control of people’s minds.