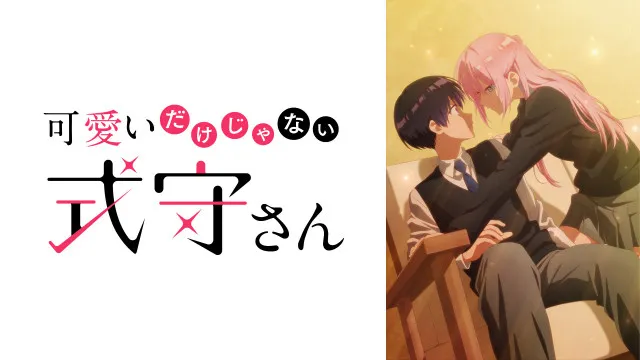 Kawaii dake ja Nai Shikimori-San has two main attractions: the overly cool words and actions of the beautiful girl heroine Shikimori-San, and the heroine-like cuteness of the boy Izumi, who has an unhappy constitution. Plus, the occasional gap between the two is just irresistible. ……! This work has received a total of over 1 million “likes” on Twitter, and a TV anime adaptation is also in the works. Let’s take a look at its charms in more detail below.

|First, the main characters are explained.

Izumi’s girlfriend. Normally, she is a cute girl who blushes and sulks easily, but she also has a handsome side that dashingly comes to Izumi’s rescue for his sake. However, she loves Mr. Izumi so much that she sometimes glares sharply at her classmates who call him a “slacker. …… She is a perfect girl with excellent grades and athletic skills, and has won a basketball game for Izumi-san by flipping off flying newspapers without looking at them. However, her cooking is her undoing.

Shikimori-San’s boyfriend. He is a quiet and kind-hearted boy who could be found anywhere, but due to his unfortunate constitution, he is often involved in accidents just by walking. Basically, he is unable to avoid danger and gets injured all the time, but when Shikimori-San is in danger, he has a manly side that tries to save him. …… He is so good that he got 5th place in his grade, and although it is a little higher than Shikimori-San, he thinks it is one of the few chances to show him how cool he is.

Friend of Izumi-san. She is the ace of the volleyball team, tall, cool, beautiful, refreshing, and kind-hearted, and is a cool person who is liked and relied on by both men and women alike. She is attracted to Izumi-san’s quiet kindness and comfort, but she has no intention of telling him how she feels about him, but only secretly hopes for his happiness.

A friend of Shikimori-San. She is an energetic girl who supports Shikimori-San’s love life while teasing him at the same time. She is also a member of the volleyball club, and is an active, fresh, and cool girl who fought tenaciously with Shikimori-San to win the championship in a ball game tournament.。

A friend of Shikimori-San. Although he has a gentle face with a pair of upturned eyes, he actually speaks in a masculine tone and has a dry side that curses Inuzaki with an expressionless face, saying, “Idiot! She is a good friend who watches over Shikimori-San’s love life with Nekozaki, cheering him on. When Nekozaki ties a ribbon in a cute way at a ball game, she gets angry all over her face.

A friend of Izumi-san. He is the opposite of Mr. Izumi, a cheerful boy who suddenly starts a bean-throwing contest in the classroom after school or offers to play bowling with a friend to win a round of drinks. He invites Mr. Izumi to play with him whenever he can, and he also has a kind side that worries about him when he jumps into the room during the bean-throwing contest. He is the one who says to Shikimori-San, who is wearing a pretty ribbon at a ball game, “Isn’t it hard to move?” He is a pure and straightforward type of boy who clearly says what he thinks.

|Attraction 1 : The beautiful heroine Shikimori-San is so cool!

The usually quiet and shy Shikimori-San is a handsome boyfriend who dashingly leaps out like a knight in a pinch for the unfortunate Mr. Izumi, and it’s just so cool! In particular, in episode 3, when Mr. Izumi says, “I’m so pathetic because I always have you to protect me,” I can’t help but fall in love with the way he says, “You can stay by my side forever,” and “I will protect Mr. Izumi on my own from now on,” and how he keeps his own love alive without worrying about others. From a trivial pinch of a newspaper flying in a strong wind to a big pinch of a falling building sign, the cool Shikimori-san …… protects you from any crisis. It is no wonder that Izumi-san falls in love with him as cool and likes him.

Not just cool! The cute dereliction is also precious.

And the cute side of Shikimori-San, who is usually so cool, is also good! It is different from tsundere, and the confused and embarrassed appearance of a girl who is usually cool because of love when she is on the side to be protected is something that makes one’s heart ache. A recommended dere scene is the bean-throwing scene in episode 12. Izumi-san runs out to protect Shikimori-San, who almost falls down after stepping on a bean. The scene in which Shikimori-San blushes and is confused by his manly kindness is a really cute “dere” scene.

|Attraction 2 : Izumi-san, the protagonist of the story, who has a bad luck constitution, is so cute!

It’s really cute how Izumi, who has been injured since childhood due to her unfortunate constitution, is protected by Shikimori-San like a heroine and falls in love with him all over again! Normally, one would think that she would be nay-nay and unreliable, but thanks to Izumi’s honest and grateful nature and the cool Shikimori-San who is always there to protect her, she has become a completely adorable heroine. The last scene of episode 19 is where we see Izumi as a heroine. When the junior girls gathered around Shikimori-San, who became the school hero after the ball game tournament, Izumi-san was also noticed as “cute,” but Shikimori-San quickly stepped forward to hide it. Shikimori-San, who wanted to monopolize the situation, of course, and Izumi-san, who was unaware that she was being noticed and protected, were really cute.

The boyfriend power is also great when the occasion calls for it.

Izumi-san is cute, but she’s cool because of the boyfriend skills she displays when the moment calls for it! You and Shikimori-San will be touched by the coolness and gap of his receptiveness and masculinity that he sometimes shows, rather than just being protected. A cool scene I recommend is in episode 13, when Shikimori-San eats his lunch box, which tastes bad, because he made it for him, and Izumi-san’s coolness and generosity make your heart flutter.

|Kawaii dake ja Nai Shikimori-San” is a unique romantic comedy of a good-looking girlfriend and a slovenly boyfriend.