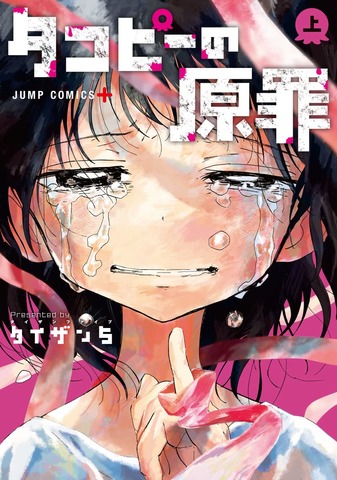 The first volume of “TAKOPI’s Original Sin,” serialized in Shonen Jump+, was released on March 4, and the book seems to be so popular that it was reprinted before its release.

The reason for its popularity is probably its shocking content, which simmers the darker side of society, including bullying, family breakdown, suicide, murder, and neglect, as well as its skillful storytelling. It is a work with many so-called “elements to consider,” and the information presented to the reader is very well controlled, drawing the reader into the story with a strong sense of urgency.

It is a very thought-provoking work, and I would like to consider the appeal of this work in my own way. The key word is “femme fatale.

The protagonist of this work is a creature named TAKOPI, which looks like an octopus and comes from the planet Happy. It looks like a yuru-chara character and has landed on Earth to spread Happy in the universe.

TAKOPI is not his real name, but was given to him by an elementary school girl named Shizuka, whom he met on Earth, and in return for giving him bread, TAKOPI unleashes various magical items to make Shizuka happy.

The introduction of the story is like a delightful fantasy or magical girl story. One is led to believe that the girl meets a strange creature that uses magic and is transformed, but Shizuka shows little interest in TAKOPI’s tools. Flying is standard in magical girl stories, but Shizuka leaves, saying, “Even if I could fly, it wouldn’t make any difference anyway. As she leaves, the school bag on her back is covered with graffiti and scratches that suggest that she was bullied, reminding the reader that this is neither a fairy tale nor a fantasy.

TAKOPI knows nothing of malice. He is so innocent that he does not even know what bullying is. The story unfolds as TAKOPI repeatedly travels back in time to save Shizuka from committing suicide.

This film confronts the difficulty of breaking the cause and effect of such a chain of victimization and perpetration. The film exposes the distortion of human society through the truth of TAKOPI’s time leap and how far back in time it is possible to break the chain.

The location of TAKOPI’s home planet, Happy, is not revealed, but it does not seem to be a world infested with bullying and suicides like this one. From TAKOPI’s monologue, “I don’t know why there is such a thing as suicide,” it would seem that there is no suicide on the planet Happy. The story unfolds from the point of view of TAKOPI, who is unaware of such malignancy, and the structure of the film brings the distortion of human nature into three-dimensional relief.

One existence that is at the mercy of such social distortions is the heroine Shizuka. She is a beautiful girl, and when TAKOPI first meets Shizuka, her cheeks turn red and “throb” as she tries to help her. There is another being who tries to help her. He is Higashi, a boy in her class.

Azuma witnesses Shizuka and TAKOPI committing a “certain crime. Azuma begs Shizuka to help him with his sparkling eyes, and he becomes a part of the cover-up of the crime. Azuma-kun, the child of a doctor and the class president with excellent grades, goes astray as a human being.

Shizuka at this point functions in the story as a “femme fatale” who seduces men and leads them to their doom.

Femme fatale, meaning “woman of destiny,” is a concept that often appears in stories as an entity that entraps and destroys men. In the past, it was a standard character in Hollywood film noir (crime films), etc. In Japanese, it is similar to the nuance of “bad girl.

In recent years, this femme fatale character has often been criticized as an uncritical symbol of a male-dominated society. The bad girl who leads men to their doom is a character who is seen as such from the male point of view, and often the women have no intention of seducing the men.

From Shizuka’s perspective, she merely needed to beg someone for help to get out of her miserable circumstances. When she asked for help from a classmate who happened to be there, he somehow stepped out of line. Shizuka can only behave that way because of her miserable circumstances. And because of that initial experience of success, Shizuka ends up acting in a way that destroys her opponents one after another.

This film brilliantly shatters the femme fatale fantasy with its theatrical skill. If there is an evil woman who drives men crazy, it is in an environment where they can only live that way. And the film is a masterful depiction of how the femme fatale is created by the way men see women filtered through their own viewpoints, regardless of their own intentions.

However, what makes this film so deep is that it convincingly depicts the irresistible appeal of the femme fatale, while also describing the structural problems of society. The story of being played by Femme Fatale also symbolizes masochistic desires on the male side, and this film somehow evokes the sweetness of destruction. As a reader, I felt as if I were being tested to see if I could resist this sweetness.

This film beautifully reveals the cruel world that creates an environment in which one cannot live without becoming a femme fatale. The only way to make someone happy in such a distorted society is to make someone else unhappy.

The book that has been released is the first volume, so it will probably be completed with the first and second volumes. There is no need to stretch things out, and you will be able to enjoy the controlled play until the very end. I am looking forward to seeing how the story will end.