SPY x FAMILY Spoilers for each volume｜Attractiveness and the latest news on the anime adaptation! 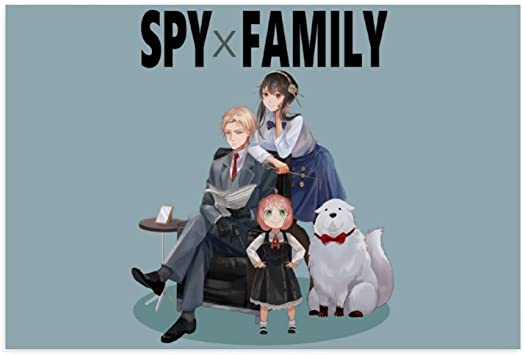 The work is now attracting a lot of attention, with a total of over 12.5 million copies of the comics sold by November 2021, and an anime broadcast beginning this April.

In this article, we will explain the outline of “SPY x FAMILY”, points to enjoy, and the latest information.

Finally, the “SPY x FAMILY (SPY x FAMILY)” anime has begun airing!
It airs weekly on April 9 (Sat.) from 23:00 on TV Tokyo and other stations.

The anime is scheduled to be broadcast in two “split” episodes on TV Tokyo and elsewhere.

At first glance, “spy” and “assassin” may seem like serious and action-oriented works, but despite the setting, “SPY x FAMILY (SPY x FAMILY)” has many heartwarming x comedic elements.

The detailed story will be introduced in the synopsis section of each volume.

|Introduction of Main Characters in “SPY x FAMILY”｜What is the Forger Family, a family in disguise?

Here we introduce the main characters, who are essential to understanding the story.

Lloyd Forger’s public face is that of a father and a brilliant psychiatrist.

And behind the scenes, he is the No. 1 spy in the West. His code name is “Tasogare.

In addition to his extraordinary powers of observation, memory, and athleticism, he has been able to successfully complete any mission with his ability to disguise himself using a hundred different faces.

He was given a new, extremely challenging mission, “Operation Strix (Strix).
The mission was to “get married and have a child within a week.
Lloyd (Tasogare) finds a “wife” and a “child” for this mission and creates a fake family, the Forgers.

For the operation, Lloyd (Tasogare) was looking for a woman to be his mother (wife), and Yol Briar appeared.

On the surface, she is a calm and kind-hearted woman who works as an office worker at the Berlindt City Hall.
But her true nature is that she is an assassin.
She belongs to an assassination organization called “Garden” and works under the code name “Thorn Princess.

She is a woman with a strong sense of public image and a desire to “get married soon and reassure her brother, the only family she has left,” so she has entered into a sham marriage with Lloyd (Tasogare), a man with whom she has a common interest.

A girl Lloyd (Tasogare) met when he was looking for children at an orphanage for an operation.

Therefore, neither Lloyd nor Yol know about Anya’s ability.
However, Anya knows that Lloyd is a “spy” and Yol is an “assassin” because of her psychic ability.
I am always “excited” to read what is going on in their minds.

Here we share our knowledge with you to help you enjoy “SPY x FAMILY (SPY x FAMILY)” even more!

One of the most attractive features of SPY x FAMILY is that it is set in an actual historical period!

SPY x FAMILY takes place in 1960, in Europe after the end of World War II.

This can be seen from the fact that all the text is written in English and the furniture and clothing that appear are from the 1960s.
Other elements of SPY×FAMILY that are typical of the 1960s and Europe are as follows.

The best part of “SPY x FAMILY (SPY x FAMILY)” is that you can experience this authentic spy mission while calling yourself a heartwarming comedy manga!
This time, the talented spy Tasogare was given a new top-secret mission, “Operation Strix.
The purpose of the mission is “to contact Donovan Desmond, President of the National Unity Party, who threatens the peace between East and West, and to find out what he is up to”!

Such an important mission Operation [Strix (Strix)] is a combined mission, and the mission procedures are sent from WISE each time.

Watching a mission go through these phases makes us, the readers, feel like we’re part of the top-secret mission, and we’re excited to follow the story to see what happens next!

Point 3) The author is Mr. Tatsuya Endo, who was also an assistant for Aoeki.

In reading SPY x FAMILY, I would like you to know a little about the author of this work, Mr. Tatsuya Endo.
He is an experienced manga artist who had been working for 20 years before “SPY x FAMILY” became a big hit.
The manga artists he worked with during his time as an assistant are absolutely gorgeous!

It seems that you have worked as an assistant not only for boys’ manga, but also for girls’ manga in all fields.

Tatsuya Endo’s drawing ability is so strong that when he was an assistant, it was said, “When Endo is around, the drawing ability of the work improves.
Yuji Garai, the author of “Jigokuraku,” which is also serialized in “JUMP+,” admits his skill as one of the “Three Musketeers whose drawings are so good that they make him fall flat!

|SPY x FAMILY” each mission from volume 1 to volume 8!

Here is a summary of the first eight volumes of SPY x FAMILY (SPY x FAMILY)!

SPY×FAMILY” Mission 1: Create a fake family and enroll your child in the prestigious Eden School.

SPY x FAMILY” Mission 2: Get close to the son of the President of the National Unity Party.

SPY x FAMILY” Mission 7: Get the “Sweetness of Wisdom,” which makes you smarter as soon as you eat it.