What is the identity of Glass in The Rising Of The Shield Hero? His techniques, strength, and purpose. 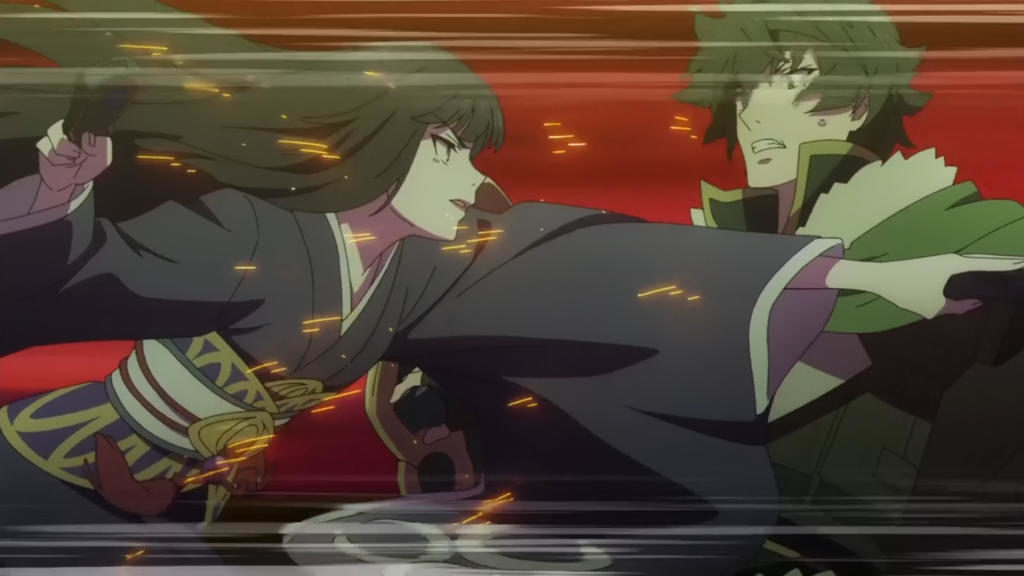 Glass appears in “The Rising Of The Shield Hero” and is an inhabitant of a different world from that of Iwatani Naofumi (the Shield Hero), and is also a hero. He appears during waves and attacks Naofumi and his friends. He is so overwhelmingly strong that he can easily defeat Soul Eater, and he has a strong belief in protecting his country.
In this article, we will focus on the true identity of Glass.
We will also explain Glass’s techniques, strength, and purpose.

|Basic information about “The Rising Of The Shield Hero” Glass

Glass is an inhabitant of a different world from that of Iwatani Naofumi and her friends, and is a brave warrior with a fan. Her jet-black kimono and iron fan are distinctive, and she appears during waves to attack the heroes. She is strong, beautiful, and somewhat sad. As her name suggests, she fights with a fan as a weapon in battle.

She first appears in episode 11 of the anime, when Naofumi and the other heroes are struggling against the Soul Eater.
Wearing a jet-black kimono, she defeats the Soul Eater that Naofumi and the others are fighting with a single blow, and she thinks that all the heroes except Naofumi are her followers.
He tells Naofumi that he is the enemy of the heroes and challenges Naofumi to a true wave of battle.

|‘The Rising Of The Shield Hero’ Explains Who Glass Is

Glass’s race is spirit. A spirit is a kind of spirit, so to speak, and has no status such as HP. Therefore, if the total amount of their energy is high, they become powerful, and if it is low, they become weak. It can be thought of as a species that excels in short-term battles.

Identity of Glass: The Hero of the Fan

Glass is a brave hero of the household appliance “Fan”. He was chosen by the otherworldly household device, the fan. He fights with a fan as a weapon, and unleashes powerful attacks. His strength is such that he easily defeated an opponent that Naofumi had great difficulty with!

Lark is a brave warrior of the “Scythe” in the same different world as Glass. He has a cheerful personality and is very reliable like an older brother.
In episode 23 of the anime, Naofumi and his friends came to Carmilla Island to level up, and they worked together to defeat monsters and level up together. The battle with the scythe was powerful, and Naofumi and the others were surprised at its strength.
However, after defeating the monsters, they suddenly attacked Naofumi and the others. There, they were told for the first time that Lark and Terris had also come from another world to protect their own world.
Lark is also trying to defeat the Four Saints to protect the people in their world, but the kind-hearted Lark hesitates to kill Naofumi.

Terris are a race of people known as “crystal people. They love gems, have the ability to hear the voices of gems, and use magic to draw power from gems. In episode 23 of the anime, she asked Naofumi to make her a jewelry using gemstones, and Naofumi made her a bracelet using a stone called “Starfire.
Terris burst into tears when she saw the bracelet and was thrilled that the gemstone was full of joy.
When a wave occurs on Carmilla Island, Lark and Terris also fight alongside Naofumi and the others.

Lark and Terris’s combined attack was incredibly powerful.
Terris was also attacking Naofumi and his group to protect the people of their world, but sad voices were heard from the jewel and they called off their attack.

|Explanation of Glass’s techniques and strength

Glass fights with a black fan.
He has a variety of fan techniques, such as “Ranbu Zero-kata Gyakushiki Yukigetsukanohana” and “Ranbu Hashi-kata Kamekouwari,” in which he spreads his fan and sends butterflies of light flying, and attacks with his iron fan.
In battle, she skillfully uses these techniques to attack Naofumi and her friends. In the 25th episode of the anime, she also uses a composite technique with Terris, and Naofumi was struggling with her strong attack power and the fact that she does not show any openings.

Not compatible with Naofumi’s SoulEat.

In episode 25 of the anime, when Naofumi’s shield uses the Soul Eat Shield, Glass is frightened.
Why was he frightened?
As explained in the section on the identity of Glass, Glass is a soul person (spirit). Naofumi’s Soul Eat Shield absorbs the SP of the enemy.
Normally, this would only reduce SP, but in the case of Glass, it is incompatible with Soul Eat Shield, as it causes damage similar to that of having one’s life cut off.

Will Glass and Iwatani Naofumi reconcile?

After a fierce battle, they defeat Kyou and Naofumi and Glass reconcile.