Spoilers for the conclusion of the third season of the “Is It Wrong to Try to Pick Up Girls in a Dungeon?” anime! Also, the ending of Belle vs. Asterios. 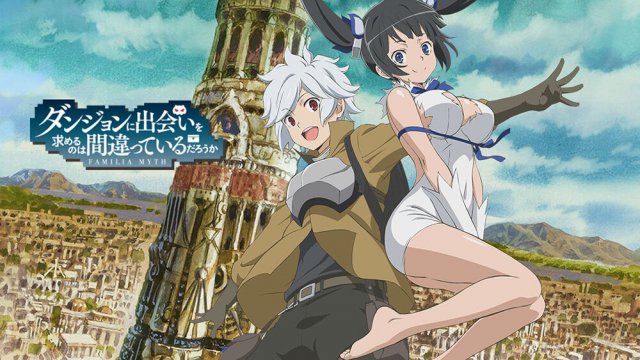 |Is It Wrong to Try to Pick Up Girls in a Dungeon?

Is It Wrong to Try to Pick Up Girls in a Dungeon?
Bugs are fun. I’m hooked. In my personal opinion, it has surpassed Rizero. Well, there are other interesting things in it. But I’m so hooked on it that I’m going to buy all of the novels.
It also renewed its No. 1 overall recommendation ranking, and it was the best anime ever!

The Hestia Familia was given a compulsory mission to protect Weene, and the members of the Familia, with the exception of Hestia, took Weene to the 20th level of the dungeon.
There, they find a monster called “Xenos” who, like Weene, has feelings, intelligence, and language.
Uranos, who aims for “the coexistence of humans and monsters,” protects these heretics with the help of Fells.

On the other hand, Dix of Ikaros Familia was earning money by capturing and trafficking heretics.

The price of Bell paid to protect Weine.

Belle, who finds it difficult to live with Weene, leaves Weene with a group of heretics and returns to the home. However, Dix attacks the group of heretics and kidnaps Weine.
This angers some of the heretics, and they attack the city of Rivier on the 18th level to find the culprits.
When Bell, who has joined the monster-killing party, goes to the dungeon, he is confronted by Dix.

Dix places a curse (cursed) on Weene, and Weene goes out of control on the ground. Belle scrambles to protect Weene from the adventurers’ attack, but Belle’s reputation in Orario is ruined because of her protection of the monster.

Weene, once dead, is brought back to life by Fells’ revival magic, but Belle has paid a heavy price.

The heretics who came to the surface, such as Weene, are not allowed to return to the dungeon and are left behind on the surface under the watchful eyes of the adventurers.

|Is It Wrong to Try to Pick Up Girls in a Dungeon?

After rescuing Weine, Bell’s reputation, which had been enhanced by the war games, plummeted. Even the local children give him the cold shoulder.
Not wanting to cause trouble for the Familiars, Belle intends to return the heretics left behind on earth to the dungeon on her own. However, Welf, Haruhime, Mei, and the other members of Hestia Familia decide to cooperate with Belle and carry out a plan to return the heretics!
Uranos’ one hand man, Fells, was also preparing for the return of the heretics.

The development of each camp’s intentions is complex and intertwined.

The leading familias of Orario are aware of the presence of heretics, and the Loki Familia gather their forces in the Street of Daedalus and the Freia Familia in Babel (the central tower), targeting heretics left behind on the ground.

The god Hermes also makes moves, such as giving the “Epistle of Daedalus” to Uranos and the bracelet of Bel’s lost and found to the guild Aena, which would later be of great significance.
The Hephaistos, Takemikazuchi, and Miaha familiars were not sure how to treat the heretics, but in the end they decided to cooperate with the Hestia familia’s return of the heretics.

Uranos, the guild’s chief god, had placed a bounty on the heretics to keep them from aligning with the other adventurers.

Hestia Famili will thin the defenses of Daedalus Street by having Belle act as a decoy to attract adventurers. Lili also uses her magic Cinder Era to transform into Almiraj and disguise the adventurers. Welf and Life disappear with the Magic Veil, leading the heretics to a doorway that leads underground.
Loki Familia, however, anticipates that Belle will be the decoy, and puts Ayse in charge of monitoring Belle.
Tione, Tiona and Gareth also pursue the heretics.
Hestia Familia is not to be outdone, and Lili, transformed into Finn, counters by issuing false orders to the members of Loki Familia.

Bell vs. Eyes! Eyes has a change of heart.

Is It Wrong to Try to Pick Up Girls in a Dungeon?Looking forward to the 3rd season & Aiz-tan is cute!

With Weene, who has become separated from her friends, Belle heads for the doorway to the underground west of Daedalus Street. However, Ize, who cannot recognize a heretic, stands in front of Belle, and it’s Belle vs. Ize battle! However, the difference in ability between him and the sword princess is great, and Belle is knocked down repeatedly.

Weine, seeing this, breaks her own claws and tears off the dragon’s wings in front of Aizu to prove that she will not harm anyone. Eyes then says, “I can’t kill that dragoness,” and she puts down her sword, letting Belle and Weene go.

Weene joins Rhett, Arle, and the other heretics, says goodbye to Belle, and returns to the dungeon.

Based on the blueprints in the “Handbook of Daedalus” given to him by Uranos, Fells, Lido, Gross, and others set out for the entrance to the man-made labyrinth, but the road dead-ended in the middle of the labyrinth.

In fact, the “Epistle of Daedalus” was a fake prepared by the god Hermes.

Asterios intervened for a revenge match against Bell.

Bell starts the fight, but sheathes his knife in the process because he did not want to fight.

Gross responds and halts his assault.
Here, without warning, Asterios appears and a battle with Belle breaks out!
Asterios is the reincarnation of the Minotaur who was once defeated by Belle in the dungeon, and has appeared to take revenge on Belle.

Bell vs. Asterios Settlement! Heretics go to the dungeon

Watching Belle fight for herself, the residents of Orario begin to cheer her on. Freya and even Hermes, who did not get his way, watch Belle’s battle with bated breath.
Bell attacks Asterios with six firebolts in a row, among other things, but is defeated in the end.

Taking advantage of the commotion, Gross and the other heretics return to the dungeon. Bell succeeds in getting the heretics back to the dungeon without any casualties. However, he still feels regret over his defeat at the hands of Asterios, and he strongly wishes to become stronger.

These are the end spoilers for the third season of the “Is It Wrong to Try to Pick Up Girls in a Dungeon?” anime!

|Explaining what happened after the third season of “Is It Wrong to Try to Pick Up Girls in a Dungeon?” (the fourth season of the anime).

I will explain some of the content after the third season of the anime (the fourth season of the anime). Belle regained her honor, which had once fallen to the ground, by fighting Asterios. Determined to become even stronger, Belle soon rose to Level 4 and earned the nickname “Rabbit’s Foot.

At that time, Hestia Familia received an expedition mission from the guild, and with help from Miaha Familia and Takemikazuchi Familia, she obtained the treasure she was looking for on the 25th level.
However, on the 24th level, they encounter an enhanced species that has attacked numerous adventurers. The Takemikazuchi Familia, Chigusa, is parasitized by the monster’s seed.

This makes Belle and her friends decide to defeat the reinforced species. In the fourth season of the anime, a new enemy will be introduced and we will be facing a new development. We can’t wait to see what happens now!

Here are spoilers for the conclusion of the third season of the “Is It Wrong to Try to Pick Up Girls in a Dungeon?” anime.