Spoiler commentary and discussion summary of The Devil Is a Part-Timer! 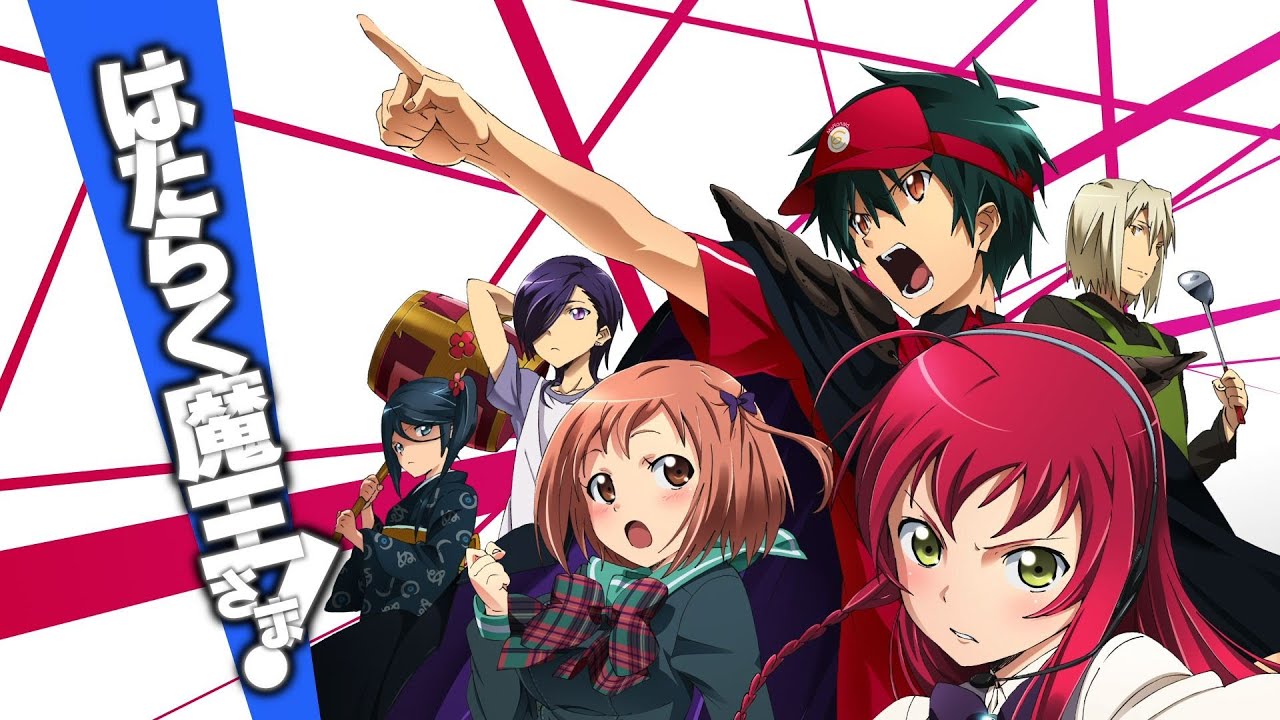 The light novels by Satoshi Wakehara are serialized in Dengeki Bunko, and the anime and comics are based on the light novels. After being defeated by the hero Emilia, the Demon King Satan arrives in the otherworldly city of Sasazuka in Tokyo, where he becomes a super-competent, super-good freelancer and plans to invade the world again. However, the appearance of a pursuer who appears in Sasazuka to put the finishing touches on Satan, and the rebellion of a demon, make the Demon King’s peaceful part time life extremely turbulent.

|The Devil Is a Part-Timer! Storyline

Satan the Demon King vs. Emilia the Brave. The Death Struggle of Ente Isla

The cross continent of Ente Isla floats on the great sea of Igunnola and is watched over by the gods. Now, it has been overrun by the demon king Satan, who has invaded from the demon world, and humans have been cruelly cut down to nothing.
Satan, who rules Ente Isla in order to build a royal paradise for demons, has subordinates who are no less devoted to him than he is: Arsiel, Malacoda, Adramelech, and Lucifer. They are called the Demon Lords and ruled the four continents of Ente Isla with overwhelming power.

One day, however, the Demon Lord’s army suddenly collapses with the appearance of the brave Emilia.
The cornered Demon King Satan retreats to the Otherworldly Gate with his only surviving subordinate, Arsiel. They end up in a place called Sasazuka, Tokyo.

Upon arriving in the other world of Sasazuka, the Demon King Satan went to secure a family register and certificate of residence.

After coming to the other world of Tokyo, the demon kings have been stripped of their magical powers and have fallen into human form. Through twists and turns, they come to understand their situation.

This world is ruled by humans.
There is no magic in Sasazuka, Tokyo.
Alciel’s magical power is empty.

With no way to supply magic power and no way to return to Ente Isla, the Demon King’s priority is to conserve his magic power.
However, Satan, the Demon King, uses his remaining magical power to obtain a certificate of residence and a family register, and survives in Sasazuka while living part-time, which is unbecoming of a Demon King, and blends in with human society.

Encounter with a high school girl, Chiho Sasaki. What is the freelancer situation of Satan the Demon King?

The Demon Kings, who have turned a ramshackle one-room apartment into their residence and new Demon Castle, have turned into perfect human beings and are spending their lives in a humble part-time life.

Satan the Demon King is valued by his boss at work, and is looked upon with favor and respect by a junior high school girl, Chiho Sasaki.
To support Satan, Arsiel, the Demon Lord, devotes himself to house-husbandry while searching for a way to supply him with magical power.

His harmlessness and goodness are a far cry from the demons that once plunged Ente Isla into the depths of terror.

Reunion with the brave Emilia

One day, Arciel was feeling uneasy about the Lord, who began to mistake the “dignity of the Demon King” for “improvement of status in the workplace,” starting with his joyful reports of a 200 yen per hour wage increase.
One day, Emilia, a brave woman who crossed the Otherworldly Gate and came to Sasazuka, appears in order to choke out Satan, the Demon King.

However, this is the beginning of a series of unexplainable incidents around the Demon Lords, and the possibility emerges that new assassins from Ente Isla have come to kill the Demon Lord Satan and Emilia the Brave.

The rebellion of Lucifer, the Great Satanic General

The culprits who were plotting to eliminate the Demon Lord Satan and the hero Emilia, and causing the incident in Sasazuka, were Orba Meyer, a leading figure in the Great Lawgiver Association to which Emilia belonged, and Lucifer, a demon marshal who was supposed to have been vanquished with the destruction of the Demon Lord’s Army.
Satan, who had foreseen this possibility in advance, unceremoniously joined forces with the brave Emilia to punish the traitors.
As a result, Orba is taken away by the police as an unidentified person, and Lucifer, who has nowhere else to go, comes to live in the Demon King’s castle (a rundown apartment) thanks to Satan’s generous arrangement.

The residents of Ente Isla live their own lives in Sasazuka, while aiming to return to their hometown. However, they will soon find themselves caught up in problems that affect the very foundation of Ente Isla, as well as the dark machinations of the heavenly and demonic realms.

The protagonist of this work.
He is fair, diligent, and honest. He is a big-hearted person who brings in talented people regardless of friend or foe, and tries to understand the people he once ruled.
He plans to reassert control over Ente Isla (and later the Earth), and as a stepping stone to this goal, he aims to be promoted from a part-time to a full-time employee.
He is synonymous with fear and cruelty, and after ruling the demon world, he led the demon king’s army to invade Ente Isla, but in reality it was a desperate measure to cover the depletion of the demon world’s magical power and prevent the annihilation of demons.
In the invasion and governance of the four continents of Ente Isla, he left everything in the hands of each of the demon generals, and as a result, he allowed some atrocities that he did not want to commit.
Although he looks about 20 years old, his actual age is over 500 years old.

One of the demons who follow the Demon Lord Satan.
He is renowned as the most knowledgeable general and chief strategist in the Demon Lord’s army, and after drifting ashore in Sasazuka, he assists the Demon Lord while devoting himself to house-husbandry.
When he was in charge of invading and ruling the eastern continent of Ente Isura, he was the first to conquer the continent, leaving the other continents behind, and was the only one of the continents that did not revolt.
He is a man of common sense with a keen sense of decency and propriety, but when it comes to the Demon King to whom he swears allegiance, his evaluation of the Demon King instantly becomes lenient, sometimes to the dismay of those around him.
He looks like he is in his 20s, but his actual age is over 1500 years old.

A second-year high school student at Tokyo Metropolitan Sasabata Kita High School, she is a junior at Maou’s workplace. She has a liking for Maou.
She is intelligent, clever, polite, and innocent.
She is involved in Lucifer’s rebellion and learns the true identity of the Demon Lords from Ente Isla, but they remain friendly with each other as before.

Half human, half angel, 17 years old.
He is a brave warrior of the Church of the Great Lawgiver, but in simple terms, he is a “dispatched brave warrior.
She swears revenge against Satan because her peaceful life with her father was destroyed by the invasion of the Demon King’s army.
He has a rough temperament and a strong personality, but he is also very supportive of his friends. He sometimes shows his tearful side, which is appropriate for his age.
After coming into contact with Satan, who behaves in a manner uncharacteristic of a demon king, she is torn between her current situation and her desire for revenge.

He is one of the Great Satanic Generals.
Formerly an archangel called the Son of Dawn, he became a fallen angel because he had too much time on his hands.
He rebelled on a whim, and after being purged before the joint front of Demon Lord Satan and Emilia, he began to stay at the Demon Lord’s castle. He is unable to leave the castle because of the misdeeds he committed in Sasazuka, and is gradually falling into the status of a NEET fallen angel.
Her age is unknown, but she is said to be “several hundred times older than Chiho Sasaki.

She is a Yamato Nadeshiko who moved in next door to the Demon King’s castle.
In fact, she is the first inquisitor of the Council of Reformation of the Church of the Great Lawgiver, who came from Ente Isla, and was sent to help defeat the Demon King Satan and his followers by siding with the brave Emilia.
He is sent to help defeat Satan and his followers. He sees the true nature of demons, which are harmless and not so different from humans, and struggles between his current situation and his religious beliefs.
She is in her early 20s.

She is a Yamato Nadeshiko who moved in next door to the Demon King’s castle.
In fact, she is the first inquisitor of the Council of Reformation of the Church of the Great Lawgiver, who came from Ente Isla, and was sent to help defeat the Demon King Satan and his followers by siding with the brave Emilia.
He is sent to help defeat Satan and his followers. He sees the true nature of demons, which are harmless and not so different from humans, and struggles between his current situation and his religious beliefs.
She is in her early 20s.

Original light novel serialized by Satoshi Wakehara in Dengeki Bunko (ASCII Media Works) since 2011. The original illustration design is by 029.
The series has already been published in 18 volumes, including the past volume depicting the Ente Isla period of the Demon King Satan and others, and continues to be published in the following volumes.
The prototype work “The Demon King’s Castle is Six Tatami Mat Rooms! won the 17th Dengeki Novel Award Silver Prize.

The Devil Is a Part-Timer!” aired in 2013. anime of 13 episodes.
The main cast includes Ryota Aisaka, Yoko Hikasa, Nao Higashiyama, Tomoki Ono, Hiro Shimono, and Kanae Ito.
The animation company WHITE FOX, which has produced “STEINS;GATE,” “Jormungand,” “Re:Zero kara Hajimeru Isekai Seikatsu” and other works, is in charge of production.