The Maid I Hired Recently Is Mysterious Lilith’s Identity Voice Actor! How many episodes of the anime, how many airings, how many volumes of the manga, from where to where? 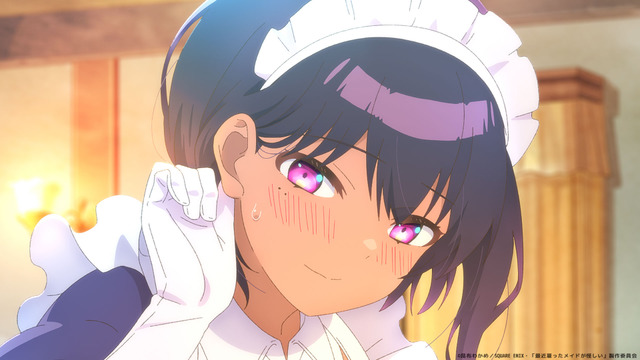 The Maid I Hired Recently Is Mysterious” is a Japanese manga work by Wakame Kombu. It is currently serialized in Square Enix’s web comic distribution site “Gekkan Gungan JOKER” and ranked 9th in the “Next Coming Manga Awards 2020,” and is a very popular work with an anime broadcast scheduled for July.

|Summary, Worldview, and Synopsis for The Maid I Hired Recently Is Mysterious

I would like to provide a synopsis and overview here about The Maid I Hired Recently Is Mysterious, which is scheduled to begin airing its anime in July.

First, the synopsis of the film is summarized below.

Yuri, the owner of a small country mansion, is investigating the identity of Lilith, a maid who suddenly appears. Her identity and purpose are unknown, but she works unnaturally hard, cooks and washes clothes to a frightening degree, and has those absorbing purple eyes. And with those absorbing purple eyes, Lilith must be up to something. Lilith must be up to something, she is so suspicious, so suspicious that Yuri is having trouble getting anything done. ……

The Maid I Hired Recently Is Mysterious

Yuri, who lives in a small house in the countryside, hires Lilith, a maid who comes to the house to hire her after her parents are killed in an accident and all the maids working in the house are fired. She appears out of the blue, yet works unnaturally hard and does everything perfectly, leading Yuri to suspect that she is up to something.

Yuri tries to find out who she really is, but Lilith teases him and he tries to fight back, and the distance between them grows closer….

It is a romantic comedy set in the countryside between the owner of a small mansion and a maid who suddenly appeared.

|How many episodes and how many cool episodes of The Maid I Hired Recently Is Mysterious airing?

I would like to speculate on how many episodes and how many cool episodes there will be for The Maid I Hired Recently Is Mysterious, which will start airing in July.

First of all, as for the number of episodes and the number of seasons, the original comic book has been released up to volume 5. The production of the anime started around July of last year, considering that the production of the anime has been in progress for about a year before the broadcast, and the fourth volume of the original work was released on July 22.

Therefore, the stock of the original work released prior to the production of the anime would be 1 to 3 volumes, which means that the number of episodes to be produced would inevitably be 12 to 13 episodes in a single season.

|How many manga volumes of The Maid I Hired Recently Is Mysterious and from where?

The Maid I Hired Recently Is Mysterious is scheduled to start airing in July.

First of all, as for the number of volumes, I mentioned in the previous section that it will take about a year to produce the anime, so it is highly likely that the anime will be adapted from the volumes that were released before the production started.

The Maid I Hired Recently Is Mysterious is scheduled to begin airing in July, and here we would like to introduce its characters and voice actors.

The voice actress for Yuri is Saori Hayami, who played her first major character as Momoka Kawakabe in “Momoka Tsuki” and has appeared in a variety of anime, including Kou in “My Family’s Inari,” Yui in “Sekirei,” and Shirayuki in “Red Hair Snow White,” with a clear voice tone that could be mistaken for that of her fellow voice actress, Mamiko Noto. She has appeared in a wide range of roles, from young girls to young women, adult women, boys, and quiet to cheerful roles.

She is a maid girl who suddenly appears at the request of Yuri, the owner of a country mansion, to be hired by him, and her identity is completely unknown. However, whoever trained her, she is perfect in all household chores, no matter what she is asked to do as a maid. Therefore, Lilith is always being pestered by Yuri, who is suspicious of her true identity.

Lilith is voiced by Riyo Takahashi, who made her anime debut as Kobayashi in “Rampo Kitan Game of Laplace” and went on to star in “Sore wa Seiyu! Futaba Ichinose in “Bless This Wonderful World! Megumin, Ernesti Echevarria in “Knights & Magic,” and Ninimu Larei in “Prince Genius’s Deficit State Revival Technique,” she has used her distinctive voice tone to play a wide range of roles from girls to husky-voiced boys.

|The Maid I Hired Recently Is Mysterious” Who is Lilith?

The Maid I Hired Recently Is Mysterious, which is set to air as an anime, and here we would like to introduce the true identity of the mysterious maid Lilith.

The identity of Lilith is currently unknown. This work itself is a story about a lonely boy who tries to find out the identity of an unidentified maid who suddenly arrives one day, and as he does various things to her, the distance and bond between them grows closer.

So, as the story continues to unfold with the smiling interaction between Yuri and Lilith, who teases Lilith about her identity, I wonder if there will someday be a serialized story that touches on Lilith’s true identity.

This time, I have introduced “The Maid I Hired Recently Is Mysterious,” which is scheduled to start airing in July.

The original work has only been released up to volume 5, and the development has not yet progressed that far, but I am sure that the popularity of the anime adaptation will gain momentum and accelerate the pace of the story.